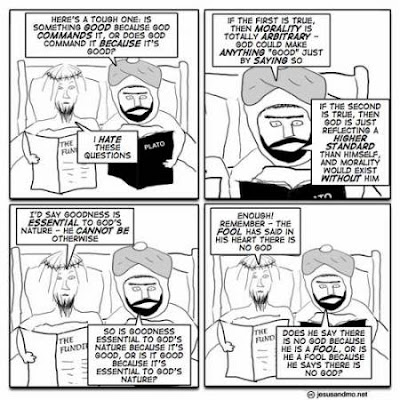 This post is a slightly updated version of an essay I submitted for a philosophy class in my third year of college.

In the Euthyphro dialogue, Socrates and Euthyphro discuss piety and morals. The central issue uttered by Socrates is, “The point which I should first wish to understand is whether the pious or holy is beloved by the gods because it is holy, or holy because it is loved by the gods” (Euthyphro 9). Other issues arising from the dialogue concern determining how to distinguish from right and wrong and how to account for the origins of morality. If believers in benevolent deities adhere to a certain religious moral code, it should be important to understand this moral code and have a response to the central issue in this dialogue. Non-believers and believers should also be able to understand and account for naturalistic origins of morality.

Euthyphro presents himself as a very knowledgeable individual in regards to the nature of piety and the gods, so Socrates proceeds to question in order to achieve understanding. Euthyphro says, “Piety, then, is that which is dear to the gods, and impiety is that which is not dear to them” (Euthyphro 5). Socrates notes that the gods have quarrels and different opinions (Euthyphro 6), but Euthyphro counters and says that the gods have agreed on certain matters and agree that injustice should be punished (Euthyphro 7).

Using a god or gods for the sole basis of morality is very problematic for several reasons. Who or what determines that the gods are moral? The gods simply declare what is moral and what is not moral without any standards or external judges. If there is no guideline outside of what the gods determine is moral, morality may be designated by the gods. With no guidelines for morality, the gods can declare certain actions like rape and murder to be morally acceptable in any given situation…and this obviously can’t be the case.

Some modern-day and past apologists assert that God would never or could never endorse something like rape, but this means that there is some sort of standard that limits God that can be viewed as external, thus we need not evoke a deity in the moral realm. Others may assert that God’s character is what makes God’s commands moral, but this backs the dilemma up a step and forces the theist to consider “Is an action justified because God’s character endorses/is in line with the action or is an action ethically justified because it is endorsed/is in line with God’s character?”

Another main problem is how we can even establish, in the first place, that a god is good or, in the case of many theists, that a god is omni-benevolent. When we consider whether a person is moral or not or, in the case of god, whether a god is moral or omni-benevolent, one would, I would wager, look at the actions and inactions, in many cases, of a being. What examples, exactly, do we have to draw from to establish that god is good? With threats such as the problem of evil or specific religious passages in which gods endorse abominable actions, it’s quite hard to establish this.

Humans are social animals who need to work together to some basic degree in order to have a society. Although survival of society is by no means the only consideration for morality, this is a good explanation for how morality came to be. We treat others how we would like to be treated when we arrive at the conclusion that other humans have basic desires such as we have like need for shelter, security, privacy, stability, etc. At a very basic level, people refrain from being immoral because they want to avoid punishment and maintain a good reputation. It is possible to account for a naturalistic morality separate from what the gods declare to be moral or immoral.

Morality is informed by human knowledge, research, philosophy, evolution, basic intuitions, and societal rules. Over time, some actions previously considered acceptable such as slavery and stoning adulterous women have been abolished because of our increased understanding and empathy toward others. In the case of slavery, the god of the Old Testament explained rules for owning other beings. Today, whether or not people believe in any gods, we can look at these passages with horror and come to the conclusion that owning other humans beings is morally wrong. We can judge the rules that are said to come from the Christian god and view them as morally repugnant.

Reflecting on the Euthyphro dialogue reveals that morality can be had independent of what the gods say. If we agree with what the gods say is moral, the decision of the gods is arbitrary and the gods are just endorsing what we already know. Regardless of whether or not any gods exist, we can deliberate and come to conclusions about moral issues and even revise our moral zeitgeist when our current state of knowledge advances. With morality declared by the gods, this doesn’t seem to be the case because the questions have already been answered and the word of the gods is supposed to be final. Morality is determined independent of the gods and humans can come to conclusions without divine declarations.