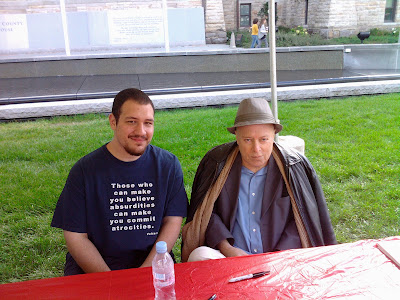 I’ve been waiting patiently to meet Christopher Hitchens and finally got the chance on October 2, 2010 at the Scranton Pages and Places Book Festival.

I was quite impressed that Hitchens honored his appearance in Scranton, had a book signing, and participated in the “Authors of Argument” discussion. Hitchens was forced to cancel many appearances due to his cancer complications, but still came to NEPA.

He signed three of my books, agreed to take a picture with me, and we chatted about the nativity scene controversy at the Luzerne County Courthouse along with some other topics such as Mother Teresa, Joseph Ratzinger, and Bill Donahue. I showed him the front page of the Times Leader with me on the bottom fold of the paper and Skrepenak on the top fold. Hitchens said, “The people should read their constitutions” and was laughing when I told him about my hate mail and the corruption in the county. He advised me to not let people get “a head up on me.”

A teacher of mine attended the event with me. He had a short chat with Hitchens about Christmas to which Hitchens replied with something similar to, “If you want a state of affairs where everyone is singing the same songs all month, you can go to North fucking Korea.”

Talking one-on-one with Hitchens was certainly invigorating, surreal, and very exciting. Hitchens has contributed a great deal to “modern atheism” and the intellectual life in general. Love him or hate him, Hitchens is a very intelligent and passionate individual who won’t back down, isn’t afraid to speak his mind, and won’t let his cancer stop him, either.

Hitchens was very funny, happy, nice, and excited. During the “Authors of Argument” discussion, Hitchens was as sharp as ever and was sure to rail against Mother Teresa as usual. :) His intellect and wit has certainly not diminished.