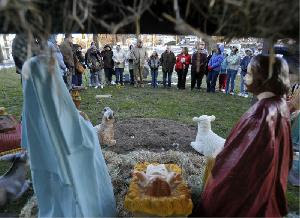 This post contains an article — no longer available — concerning the Luzerne County Courthouse separation of church and state issue I was involved with.
December 23, 2009

WILKES-BARRE – Holiday decorations were again the focus of a crowd gathered on the county courthouse lawn on Tuesday evening, but the congregation was there to celebrate rather than complain.

“Today, what we’re doing is people won a victory here. We want to show our thanks to each other and also to the commissioners and the (county) solicitor for coming to their senses,” said Gene Stilp, a Luzerne County native who spends much of his time as a voter activist in Harrisburg. “It’s a good way for the people of the county to end the year.”

About 40 people showed up to encircle the recently reinstated Nativity scene and menorah, along with new secular decorations, and announced why they’re thankful. They sang Christmas carols and prayed. Some made political pleas.

Among the new decorations are a plastic, lighted Santa Claus, Mrs. Claus, two reindeer, and some candy canes.

“Once they start separating God out of the government, that’s when things start to collapse,” said Debbie Lansberry of Lehman Township. “We need new leaders, but not just new leaders – Christian leaders.”

Several prayers were made for Justin Vacula, the King’s College student whose initial concern over the religious specificity of the display sparked a complaint from the American Civil Liberties Union. It was acknowledged that Vacula “probably has so many capabilities” and Jesus was implored to “get a hold of him” and “let him know the reality.”

Linda Mericle of Trucksville noted that the U.S. Constitution, which Vacula used as the basis for his complaint, doesn’t say religion can’t be expressed on government property, “just not be governed by one particular religion.”

“Taking away some of our beliefs was taking away our rights to assemble,” she said. “It’s never been put in the Constitution that we should be denied that.”

The activities were accentuated intermittently by honks of approval from passing motorists. One vehicle of young males expressed displeasure, booing as they waited at the traffic signal.

“Hark! The Herald Angels Sing” and “Silent Night” were among the carols sung.

Herb Fice of Kingston asked those assembled to also pray for those serving in the military overseas. “Regardless whether they’re atheist, Jews, whatever, they’re over there protecting us,” he said.

Stilp was glad to see the decorations were returned despite the ACLU’s legal threats. “It seemed like they were grandstanding. … They could have done it in a better way,” he said, such as suggesting: “We have a tradition here. How can we work this out?” Instead, he said, “I think that the county rolled over.”

He noted that the ACLU didn’t make any such threats about the county court scandal.

“People of the county needed a renewal of their spirits, and this has done it,” he added.