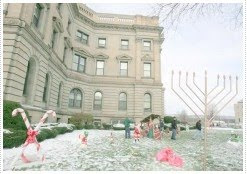 This post contains an article — no longer available — concerning the Luzerne County Courthouse separation of church and state issue I was involved with.

BY COULTER JONES (STAFF WRITER)
Published: December 22, 2009
“Luzerne County returned its nativity scene and menorah Monday to the courthouse lawn as part of a broader holiday display, after consulting with a local law firm about its constitutionality, county Solicitor Vito DeLuca said.

The display, which now includes a Kwanzaa greeting, Santa Claus and candy cane yard ornaments as well as the menorah and nativity scene, was reassembled Monday morning.

The county removed its nativity scene and menorah after threat of a lawsuit from Americans United and the American Civil Liberties Union on behalf of several Luzerne County residents. The civil rights groups contended the display, as it was arranged, endorsed Christianity and Judaism.

DeLuca said he spoke with attorneys from Rosenn, Jenkins & Greenwald, who agreed to handle the case pro bono, meaning the county would not be on the hook for up to $175,000 in legal fees that would not be covered by the county’s insurance.

“The display as it was clearly was a violation of the case law and the establishment clause of the First Amendment to the Constitution,” DeLuca said. “There is no doubt that it was. I was not able to get in touch with the ACLU to give me their blessing on modifications that they would deem appropriate. I believe that based on my review of that display we are putting up it will pass constitutional muster, and I do not believe that they will sue. If they do we will certainly be prepared.”

Richard Katskee, an attorney with the Washington, D.C.-based Americans United, said he could not comment on whether his group or the ACLU would now pursue legal action because he had not yet seen the display.

“We’ll be in contact with the individuals in the county who notified us about the display and see if they have any concerns with the new display,” Katskee said.

To be acceptable, Katskee said the display should not appear to endorse any particular religion.

Justin Vacula, a King’s College student and member of the Northeastern Pennsylvania Free Thought Society, was one of the individuals who contacted the two civil rights groups about the display. He said Monday he found the changes acceptable.

“I’m very happy that the display is now not endorsing religion and is a holiday message,” Vacula, an atheist, said by e-mail. “This has nothing to do with religion, this is a matter of the law. People are fine to celebrate whatever they want, but the government ought not endorse religion as it did. If taking an unconstitutional display away is a bad thing, you really ought to check your priorities as an American citizen. Besides, religious people can celebrate Jesus or any other being anytime they want â?¦ but the government may not exclusively do so.”

Removal of the nativity scene sparked community outrage, with several people protesting the removal since Thursday.

A live nativity scene, with people acting the parts of the nativity outside the courthouse, planned for today has been changed, organizer Gene Stilp said, now that the display was restored. Stilp said people will still gather at the courthouse around 4 p.m. to “say thank you” that their voices were heard by county officials.