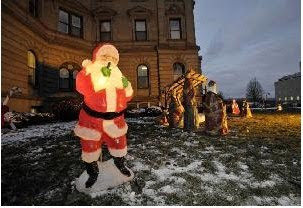 This post contains an article — no longer available — concerning the Luzerne County Courthouse separation of church and state issue I was involved with.
December 22, 2009

The Nativity scene and menorah are back on the Luzerne County Courthouse lawn, surrounded by some new secular decorations.

Added were Santa and Mrs. Claus, two reindeer, some candy canes, a little elf handling mail for Santa, a Christmas tree and signs that say “Happy Holidays” and “Happy Kwanzaa.”

The Nativity and menorah had been removed Wednesday after a litigation threat from the American Civil Liberties Union and Americans United for Separation of Church and State. After a huge public outcry about the removal, county officials accepted an offer for free legal representation from the Wilkes-Barre law firm Rosenn Jenkins & Greenwald.

Though a suit may result, the county and Rosenn firm have attempted to work with both organizations to reach an agreement on a display that does not violate the constitutional separation of church and state, said county Solicitor Vito DeLuca.

Justin Vacula, the King’s College student who initiated the complaint about the display, watched county workers as they set up the display Monday morning and said he is satisfied.

“I think the display is great. They put up other things. They’re doing it right this time. The manger isn’t isolated and illuminated at night over everything else,” Vacula said.

He jokingly said that the only thing missing is a Festivus pole, a reference to a fictitious holiday mentioned on the TV sitcom “Seinfeld.”

Vacula said he has received “a lot of hate mail from loving Christians.”

“They’re not representing their religion very well. I’ve received a lot of threats – a lot of after-death threats,” he said.

He does not regret his decision, saying people must be willing to speak out and become educated about the law.

“It was worth it. The courthouse should have done it right the first time, but now they’re doing it right,” he said.

The removal of the Nativity and menorah has sparked two protests at the site.

Inspired by these demonstrations, Dupont resident William Clarke arrived there Monday morning and paced the sidewalk in a Rudolph costume to criticize county Treasurer Michael Morreale, who was recently charged with a summary offense of deer hunting over bait.

Morreale has said he did not know the bait was there.

Community activist Gene Stilp encourages people to gather on the courthouse lawn at 4 today to celebrate the return of the Nativity.

“It’s good to be thankful and gracious,” Stilp said.

Jennifer Learn-Andes, a Times Leader staff writer, may be reached at 831-7333.