Today, Pastor Dan Nichols delivered the final sermon in Restored Church’s September sermon series dealing with the topic of sex. Local newspaper The Times Leader reported on the sermon and Nichols was kind enough to provide me with a PDF — uploaded here Disagreement _ Hatred — of his sermon prior to the release of the sermon podcast which is now available.

Nichols’ newest sermon particularly addresses the LGBT community and argues Christian belief that God designed sex to be within the marriage covenant between one man and one woman does not constitute hatred of LGBT individuals.

Nichols acknowledges that some Christians hold bigoted and hateful perspectives toward LGBT individuals, but state that this should not be the case; Nichols encourages Christians to ‘love thy neighbor “regardless of race, religion, background, financial status, or whether [they are] gay or straight” and states that “disagreement should not produce hatred.”

Nichols also mentions what he perceives as some hatred coming from communities arguing for tolerance – particularly mentioning outrage directed at Tony Dungy who said that he would not draft gay football player Michael Sam because, in part, media attention that would come with his drafting would be “a distraction” from football.

Midway through the sermon, Nichols mentions me — saying “[w]e disagree on almost every issue imaginable, but we do agree that disagreement =/= hatred.” Nichols recounts his reaching out to me in 2012 following an incident in which a Christian vandalized a banner I had hung and some hate mail I received from Christians. He also mentioned my defense of him concerning people claiming he was bigoted for his views about marriage and homosexuality quoting a blog post in which I suggest that disagreement does not constitute hatred.

I agree with sentiments throughout Nichols’ sermon and especially enjoy his rebuke of Christians being nasty toward others who disagree with particularly religious viewpoints. I don’t, though, however, think that a religious message and/or appeals to God will be a sufficient resolution to this problem because it is often the case that often at the heart of religion — whether it be practiced in Restored Church or not — is divisiveness. Indeed, not all Christians will be nasty toward others, but as an out atheist, I have received a fair share of nastiness almost certainly because of peoples’ religious views and my challenging of them – no matter how civil I would be in my criticism or activism.

Just two months ago, I wrote about a woman telling my mother, “What’s wrong with your atheist son?” at a graduation party. Family members (1, 2) have shunned me — posting nasty comments on my Facebook profile and their own — and a local bus driver posted nasty messages taunting me. In 2009, I received a deluge of hate mail including one threat of violence I reported to campus security. There’s also this, this, and this. I mention this not to ‘play the victim’ [I recognize that taking controversial public positions will often result in some backlash], but rather to note that religious belief inspires this sort of behavior.

Obviously, Nichols rebukes this activity, but there’s a considerable way to go for Christians whose religious beliefs lead to vitriol. Atheists are demonized as people trying to take away others’ rights, agents of Satan, immoral, sociopathic, incapable of love, and many other caricatures – many of which were on display on the 2014 movie ‘God’s Not Dead’ which I recently wrote about.

The Bible, too, likely inspires nasty caricatures of atheists calling them corrupt, fools who commit abominable works; wicked and dark while also suggesting that believers should not be “unequally yoked;” and suggests believers not greet atheists or let them in their houses. There is also, of course, the doctrine that people, simply because they do not believe the Christian God exists [that they disagree with Christians], will be condemned to eternal torment. There’s also lack of civility in God’s countless commands for tribes in the Old Testament to commit genocide, shebears killing youths, flooding of the world…

The divisiveness that often comes with religious belief limits the success of Nichols’ intentions to promote civility. As Nichols mentioned, though, it is not only religious perspectives which lead to hatred; people may hate for reasons wholly unrelated to religious beliefs. Personally, I find the issue of tone to be very important and, although I am not in the futile business of ‘policing the internet’ or heavily restricting comments on my social networks [I do almost no moderation], make a good effort to be civil toward others.

My message may be biting at times — specifically to Christians who take disagreement personally, considering challenges of their religious beliefs to be offensive or personal attacks — but I wish not to attack people. Instead, I am very concerned with framing conversations so that communication is not broken down and so healthy debate can flourish. Don’t hate. Debate!

Although I disagree with the religious framework Nichols presents as a solution to hatred, I can agree with Nichols’ intentions for people to have conversations and be more respectful toward one another.

Thanks again to Dan Nichols for mentioning me in his sermon and providing me a copy of his sermon so that I could write about it. I look forward to a response and the next time we eat together. 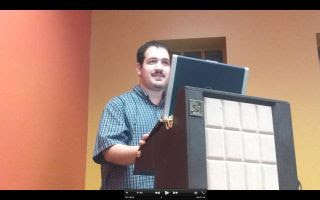 I was invited to speak at PA Nonbelievers‘ 11/10/11 meeting in Lemoyne, PA.
In my presentation, “The Luzerne County Holiday Display Incident,” I discussed the church/state battle I was involved with in 2009, the importance of secular activism, my hate mail, and much more.
For those of you who are unfamiliar with the ‘incident,’ I filed a church/state complaint in 2009 regarding a religious holiday display at the Luzerne County, PA courthouse. I quickly became “the third most hated person in Luzerne County” (according to a local DJ), received a tremendous amount of hate mail from the community at large including persons whom I attended college and high school with, and ultimately was successful in upholding church/state separation.
Thanks so much to the receptive audience at to PA Nonbelievers for having me.
PowerPoint URL:
https://docs.google.com/present/edit?id=0AUrJ2NxBfCDbZGhzNjdrcmNfMGNxcnZwY2M2

END_OF_DOCUMENT_TOKEN_TO_BE_REPLACED

My blog and Facebook profile typically have lively positive discussion that is engaging, but I get quite a large deal of hate mail. As always, I welcome discussion, but little discussion is had when people offer personal attacks, wish that someone would shoot me, and tell me to come to a dorm room so “my fat face can get fucked up [for Jesus].” Of course not all theists are like this, but many of these people are indeed your “average Joe moderates.” END_OF_DOCUMENT_TOKEN_TO_BE_REPLACED

I love hate mail from King’s College students. It’s great for blog fodder, entertainment, and proves many of my points that I put forth in my blog posts. Instead of actually responding to arguments, some people will just levy personal attacks [and ignore what I say].

I find it funny that people say “no one is impressed when you have a blog” when I constantly have people commenting and discussing my posts saying things like “great job,” “you write really well,” etc. I’m not huge by any means, but my blog is getting a huge amount of traffic and it’s quite fun. I enjoy writing and I enjoy having others interact with my ideas. People obviously are impressed by my blog.

I find it funny that people think I am arrogant when I constantly post things like “I’ll change any and all of my beliefs provided new evidence and argument comes in.” I hate the notion of absolute certainty and would never say that I am absolutely certain on anything. I always welcome people to disagree with me.

I still enjoy the argument of “it doesn’t hurt anyone” being a justification to leave things alone. Many violations of the law certainly don’t physically harm anyone, but are violations regardless. Should we leave things alone just because no one is harmed? I think not. Separation of church and state is a very important issue that people should support.

I do wear my accomplishments as badges of honor; my actions made a difference in this community and I was able to voice my opinion in a very public forum. I endured the criticism, wasn’t wavered by the threats, and didn’t shut up.

I don’t expect anyone to care whether or not I call in the Corbett show. I enjoy the radio show and like participating in discussion.

I’m not sure what the Atheist tonight show is…

I do enjoy the publicity and attention. It’s nice to be heard. Publicity doesn’t drive my actions, though. I stand up for just causes and fight for what is right regardless of what other people think. I ask questions, challenge that which is supposed to be unchallengeable, and make people think.

I’m not harming anyone by any means…I’m simply asking questions and trying to make a difference in this world. People are thinking. People are reading arguments that they haven’t heard before. More people are becoming non-religious. People are coming out of the “atheist closet” and are making a difference. The tides are turning.

The purpose of this blog is to clear up common misconceptions about commonly held beliefs (religious and others) to make people think, sharpen critical thinking skills, and for me to keep a log of my thoughts. Even moderate theists enjoy my blog. If they disagree, they can post (hopefully good arguments) and we can discuss the issues at hand. People can also read what I have to say and might possibly reconsider opinions.