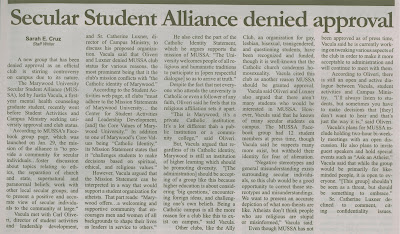 A new group that has been denied approval as an official club is stirring controversy on campus due to its nature.

According to MUSSA’s Facebook group page, which was launched on January 29, the mission of the alliance is “to provide a community for secular individuals…foster discussion about topics relating to ethics, the separation of church and state, supernatural and paranormal beliefs; work with other local secular groups; and to present a positive and accurate view of secular individuals to the community at large.”

Vacula met with Carl Oliveri, director of student activities and leadership development, and Sr. Catherine Luxner, director of Campus Ministry, to discuss his proposed organization. Vacula said that Oliveri and Luxner denied MUSSA club status for various reasons, the most prominent being that it the club’s mission conflicts with “the Catholic identity of Marywood.”
According to the Student Activities web page, all clubs “must adhere to the Mission Statements of Marywood University… the Center for Student Activities and Leadership Development, [and] the Core Values of Marywood University.” In addition to one of Marywood’s Core Values being “Catholic Identity,” its Mission Statement states that it “challenges students to make decisions based on spiritual, ethical, and religious values.”

However, Vacula argued that the Mission Statement can be interpreted in a way that would support a student organization for atheists.  That part reads:  “Marywood offers…a welcoming and supportive community that encourages men and women of all backgrounds to shape their lives as leaders in service to others.”

He also cited the part of the Catholic Identity Statement, which he argues supports the mission of MUSSA: “The University welcomes people of all religious and humanistic traditions to participate in [open respectful dialogue] so as to arrive at truth.”

Despite the fact that not everyone who attends the university is Catholic or even a follower of any faith, Oliveri said he feels that its religious affiliation sets it apart.

“This is Marywood; it’s a private Catholic institution. It’s a lot different than a public institution or a community college,” said Oliveri.

But, Vacula argued that regardless of its Catholic identity, Marywood is still an institution of higher learning which should be promoting diversity.  “[The administration] should be accepting of a group like this because higher education is about considering ‘big questions,’ encountering foreign ideas, and challenging one’s own beliefs. Being a Catholic campus is all the more reason for a club like this to exist on campus,” said Vacula.

Other clubs, like the Ally Club, an organization for gay, lesbian, bisexual, transgendered, and questioning students, have been recognized and funded, though it is well-known that the Catholic church condemns homosexuality.  Vacula cited this club as another reason MUSSA should be granted approval.

Vacula said Oliveri and Luxner also argued that there aren’t many students who would be interested in MUSSA. However, Vacula said that he knows of many secular students on campus. The MUSSA Facebook group had 12 student members at press time, though Vacula said he suspects many more exist but withhold their identity for fear of alienation.

Even though MUSSA has not been approved as of press time, Vacula said he is currently working on tweaking various aspects of the club in order to make it more acceptable to administration and will continue to meet with them.

According to Oliveri, there is still an open and active dialogue between Vacula, student activities and Campus Ministry.  “I’ll always listen to students, but sometimes you have to make decisions that [they] don’t want to hear and that’s just the way it is,” said Oliveri.
Vacula’s plans for MUSSA include holding two-hour bi-weekly meetings with an open discussion. He also plans to invite guest speakers and hold special events such as “Ask an Atheist.” Vacula said that while the group would be primarily for like-minded people, it is open to everyone. “[This group] shouldn’t be seen as a threat, but should be something to embrace.”