Skip to main content
Apparently, when you have no good arguments for your god, the next logical alternative is to attack the person who challenges your beliefs, make baseless assertions, and make demeaning statements. Here’s one for the Hall of Shame. 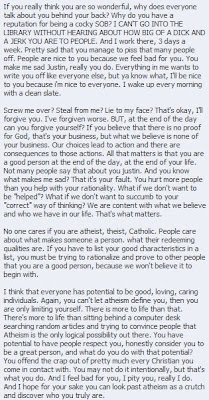 “If you really think you are so wonderful, why does everyone talk about you behind your back? Why do you have a reputation for being a cocky SOB? I CAN’T GO INTO THE LIBRARY WITHOUT HEARING ABOUT HOW BIG OF A DICK AND A JERK YOU ARE TO PEOPLE.”

Well, I can’t control what people think and how biased people are. People can read what I have to say on my blog, on my Facebook, have conversations with me face-to-face, etc, but they hardly ever do. Almost every theist I chat with face-to-face walks away not in rage, but in understanding. I’m friends with many theists here and work with theists – we share mutual respect. If you look at my hate mail, you see nothing but personal attacks, misrepresentation of my positions, and nothing but rude comments. Where am I rude to people? Where am I sending hate mail? I just have conversations, challenge beliefs, and critically examine the issues at hand.

If I’m a dick for challenging beliefs, that’s not my problem, but the problem of the people who are being challenged. If people can’t take criticism and thought provoking discussion of ideas, they might as well just crawl in a cave and just stay there.

I’d like to see one piece of physical evidence attesting to me being a dick to people, sending nasty messages, etc. You …but I can show you several hate mails from students here at King’s College. I hardly, if ever, lose my cool in discussions. I may have been a bit mean once before when people threatened my life, incited violence against me, called for people to attack me, etc, but that’s almost certainly warranted and excusable.

A very low amount of actual discussion takes place from the “haters.” Just the other day, someone who was pissed with me apologized to me online and I accepted the apology:

“So, I know I’ve been reading what you have been saying the wrong way, but after talking to one of my professors today, I’ve came to realize that I shouldn’t have, and I’m sorry.

Most of what you post is very interesting to me, as I have a strong love for philosophy. You actually remind me of Socrates actually. Mostly because you seem to tell people what they don’t want to hear.

I’d like to hear what you have to say, so if you ever want to get a coffee or something and chat I’m all ears.”

If people have a problem, they should could to me, post on my blog, etc, instead of running around misrepresenting me.

” If you believe that there is no proof for God, that’s your business, but what we believe is none of your business.”

So, do you think that we should stop all philosophy, critical thinking, and halt any societal change? Beliefs are often not private matters…they effect public policy, education, science, and almost everything in the world.

Beliefs certainly do effect me when people want to kill me because I disagree with them.

Beliefs certainly do effect me when I see a tremendous amount of unneeded suffering in the world because of a religious ideology.

Beliefs do effect me when friends are victimized by religious thoughts.

Beliefs effect me when my aunt disowns me because I’m not a Christian.

Beliefs effect society when children are taught not to listen to science and accept what the Bible says instead.

Beliefs effect society when we funnel money into abstinence-only education and forgo safe sex education. The rate of STDs in America is about 800x that in France.

We should challenge beliefs that are seemingly held for no good reason and are harmful. Psychics, for example, prey on the emotions of people who lose children and are very emotionally weak – individuals pay out thousands of dollars to scam artists. We should challenge psychics, call them out, and advocate critical thinking. I recently did this in two letters to the editor in local newspapers, online, and personally in sending a message to the psychic. Am I a bad person for doing this?

If your beliefs are so strong and true, why should me questioning them be so much of a big deal? You should be able to defend your faith as the bible suggests or just not worry about opposition.

If someone challenges what I accept as being true, I don’t threaten people, hate people, call for violence, etc. I have critical discussion with the individuals and give my side of the story. I’m not personally threatened or offended by people who disagree with me, nor do I hate people who I disagree with.

Personally, I feel that the truth and reality matters more than comfort or beliefs, but if you disagree, then simply disagree and don’t question your beliefs.

“ If you have to list your good characteristics in a list, you must be trying to rationalize and prove to other people that you are a good person, because we won’t believe it to begin with.”

Well, it seems that you’re making me out to be a bad person, so I offered a rebuttal to the claim. If someone says that you are a bad person, wouldn’t you say, “well, I’m not because…”

Anyway, how does it logically follow that since a person lists good characteristics he/she is rationalizing? Is this the attitude we should take when we meet new people?

I don’t only let atheism define me, but it is a big deal. Besides matters of religion, I read books, play D&D, go to college, have a job, have friends, play Scrabble, go to community events, etc.

I also don’t say that atheism is the only logical possibility out there. Non-theistic Buddhism, Humanistic Judaism, Pastafarianism, Humanistic Christianity, Deism (with one qualm), Agnosticism, Apathetic, Secular Humanism, Skepticism, and many other choices are viable options, I think. I just don’t think that theism is a logical possibility and have various arguments for why it is not. If you don’t agree, so be it.

“You have potential to have people respect you, honestly consider you to be a great person, and what do you do with that potential? You offend the crap out of pretty much every Christian you come in contact with…. I pity you, really I do. And I hope for your sake you can look past atheism as a crutch and discover who you truly are.”

If I’m going to be a bad person for questioning beliefs and inspiring people to think critically, I guess I’ll be a bad person. If people are “offended” by my questions and my critical examination of religion, that’s on them. I could claim offense at long dirty fingernails of males, gangster rap, baggy pants, the republican party, and various other things, but does this warrant me complaining about the people and saying that they offend me even if they don’t try to?

Asking questions and prompting people to think, apparently, is a horrible thing. We should stop philosophy, psychology, all questions of others’ ideas, movie reviews, book reviews, disagreements about sports teams, opinion polls, popularity contests, King’s Idol, all satire, all comedy, and just sit in public square holding hands followed by crawling into caves and vow to never critically examine anything, disagree with anyone, or raise valid questions about the world.

If people can’t take valid and charitable criticism of IDEAS, that’s too bad for them. Ideas don’t deserve respect and religion or anything else shouldn’t be above criticism. We should question everything, critically examine everything worth examining, and be informed citizens of the world.

Update: After this post, I was de-friended and my posts were deleted. So much for discussion.