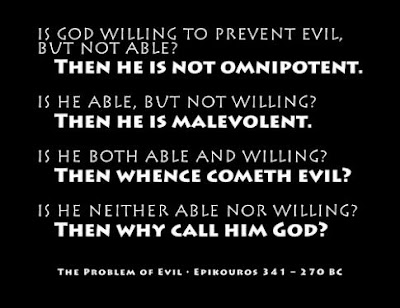 I recently finished an essay for my philosophy of knowledge class regarding the problem of evil. Paul Draper argues that naturalism is more probable than theism and that an omni-god is unlikely in a world with evil.

The idea of an all-loving, all-knowing, and all-powerful god (hereafter referred to as an omni-god) is very difficult to reconcile with the reality of natural disasters, human-produced evil and genetic defects. Paul Draper argues that pain, tragedy, and suffering is more probable and likely in a world without a theistic god and that the presence of evil is inconsistent with theistic belief. If an omni-god existed, it should follow that he/she/it would want to stop evil and not create a world with natural disaster and suffering. It seems very unlikely that an omni-god would create a universe with earthquakes, tsunamis, birth defects, and other types of natural evil.

Naturalism appears to fit perfectly with the idea of natural evil; a person would expect natural calamities in a universe that was not designed by an omni-god. Theism, on the other hand, does not seem to mesh well with natural evil. Plantinga rejects Draper’s arguments and does not consider the problem of evil to be a defeater of warranted belief in God. Plantinga’s responses to Draper are unsatisfactory, evasive, and unsatisfying.

Plantinga argues that belief in god is not like a scientific hypothesis based on observational data and that theism is not accepted because of explanatory value. He also states that the rationality of theism does not depend on explaining data (Plantinga 477). Theism may not be a scientific hypothesis, but it still seeks to explain (as a hypothesis would) various aspects of humanity, our world, and a supernatural realm.

The idea that theism is not a scientific hypothesis does not stop us from observing, evaluating data, making rational inferences, evaluating very specific claims, and making a conscious decision based on our current knowledge. We can still look at data about our world such as frequency of earthquakes, prevalence of birth defects, and people dying of starvation to say that an omni-God probably doesn’t exist because he is supposed to be all-loving and all-powerful; he should want to stop these calamities, but does not.

Apologists, priests, believers, and theologians frequently try to explain theism and make it fit with our world. Theism actually proposes answers to many questions including but not limited to “why are we here?”, “where are we going?”, and “what is the meaning of life?” In this case and many others, theism actually does provide a great deal of explanatory value to the lives of many people. If we were to evaluate alternate hypotheses about life such as naturalism and find that theism seems to be less probable, we might not want to reject theism outright, but should at least evaluate the claims being made, research, reflect, and come to a rational conclusion based on our present knowledge.

The rationality of theism ought to depend on explaining data. Theists make very specific claims about the universe that must be rationally justified in order to be accepted. If explanations for theistic claims are not satisfactory, do not hold up to scrutiny, and don’t offer plausible answers in light of facts and rationality, we should reject the claims being made. Theists propose that the universe was created by an intelligent supernatural being with the interests of humans in mind. When looking at the facts, we find that our universe contains a very large amount of empty space, dark matter, uninhabitable planets, and a sun that will eventually cause the earth to end in a heat death.

Before Jesus decided to intervene in the Middle East, as the Bible alleges, humans lived for about 75,000 years dying of simple diseases, tribal warfare, natural disasters, and childbirth. Humans almost went extinct either because of warfare, natural conditions, and many other deadly possibilities. Humans knew a very small amount of information and were terrified of a universe they knew almost nothing about. Only until about two thousand years ago, after about 75,000 years of doing nothing, Heaven finally decided to stop the madness and do something with Jesus intervening.

Does this explanatory hypothesis of Christianity seem to be plausible and consistent with an omni-god? In light of naturalism, it seems plausible that humans suffered and almost went extinct because naturalism does not assume that there is a supernatural agent who loves humans. In light of theism, it seems very improbable that an omni-god would leave humans to die for 75,000 years unaided by supernatural intervention. With no good evidence supporting Plantinga’s Christian god, it seems very unlikely that he exists.

Plantinga argues about subjective warrant and being evidentially challenged, “It is perfectly rational, internally, because it still seems obviously true to me […] So if theistic belief has significant warrant for me, then my coming to believe that it faces an evidential challenge does not provide me with a defeater for it. […] But if theism has little or no warrant, it could still be that an evidential challenge doesn’t provide a real challenge…” (Plantinga 479). It appears that Plantinga is committing the fallacy of special pleading here; he is applying different standards of justification and evidence for Christianity that he would not apply to other beliefs like young earth creationism, alien abductions, or holocaust denial.

Plantinga would almost certainly reject claims like young earth creationism and he certainly would not accept the argument of a young earth creationist who would say something akin to what he says about his Christian belief, “To me, I could see very clearly that the earth was made by God and that everything that exists was created by God in its present form. Your challenges such as evolution, carbon dating, geology, cosmology, and modern science do not provide defeaters for my belief. Even if my belief doesn’t have warrant, evidential challenges don’t threaten my belief,” so why would he think that his argument is valid?

It may be impossible to prove that naturalism is true or that theism is true at our current situation of knowledge, but probabilistic reasoning can be quite effective when we don’t have a definitive answer for questions. Theism, as previously stated, proposes certain claims about the nature of reality. If we can’t find definitive proof for theism, we can still evaluate the claims being made and view them as matters of probability, just like other claims.

In the case of defeat regarding conspiracy theories about 9/11, we can justifiably say that is very unlikely that a massive government conspiracy occurred in which no one who was associated with the United States government admitted that President Bush put bombs in the Twin Towers and arranged the planes as decoys. Likewise in court cases, probabilistic reasoning can also apply; if it is very improbable that a suspected murderer killed someone (say, for instance, that the murderer was seen in Iowa during the day of the crime that happened in Rhode Island) it is very improbable that he was the murderer.

It appears that Plantinga is looking too hard for defeaters for his Christian belief instead of providing more evidence outside of his idea that his faith is warranted as a properly basic belief. Defeaters don’t need to exist to cast doubt on a claim; the burden of proof is on the person making the claim. Plantinga needs to demonstrate that he has good reasons for believing in an omni-god and that this omni-god is logically compatible with natural evil in the world. In the case of the Loch Ness Monster, we can safely assume that the Loch Ness Monster does not exist because the arguments from the believers are insufficient. It matters not that there are no defeaters for belief in the Loch Ness Monster.

If significant worthwhile evidence is presented to challenge any belief, position, or hypothesis, any intellectually honest thinker should consider the evidence and change his/her ideas to adjust to the new information if the evidence is thoroughly convincing. Personal justification is no good reason to discount objective evidence. Even if a person thinks that he/she is very justified in holding a position, he/she should at least think about the claims that are being made even if he/she does not find justification to modify ideas. Plantinga certainly considers Draper’s objections, but he appears to evade the objections presented by forming analogies regarding different situations, does not examine naturalism, and falls back on the warrant model he proposes. In order to effectively offer a rebuttal, Plantinga ought to fully discuss and raise objections to Draper’s alternative hypothesis (naturalism), but I do not feel that Plantinga has done this.