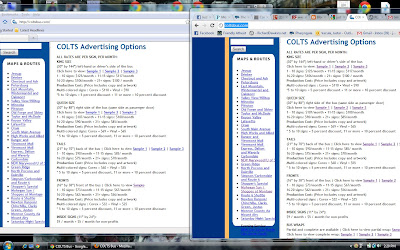 On the left, you can see only one sample ad for the front of COLTS buses, but on the right (in an old version of COLTS’ website) you can see multiple fronts in which one link shows the “Old Forge Times” website. COLTS is seemingly taking sample ads down from their website in order to hide their steps with a tremendous deal of subterfuge. (Click to enlarge.)

In a previous post, I had written about how COLTS — a bus company in Lackawanna County, Pennsylvania which receives federal, state, and county funding — refused the most inoffensive bus ad ever that simply says “Atheists.” I had also described how COLTS is discriminating and/or otherwise picking and choosing the messages they put on buses while hiding under the guise of “We don’t want anything that causes controversy or public debate” while pointing out the fact that COLTS previously featured advertisements containing “Consider adoption…it works!” and an ad for “Old Forge Times” (a website containing

Before I started to author my previous blog post, I noticed that their sample ad for “Consider adoption…it works!” was taken down. Now, when I had looked on the most updated version of their advertisement page, COLTS removed the advertisement for “Old Forge Times.”
This is silly. COLTS seems to acknowledge that they are picking and choosing the messages which they select…and when they get ‘called out’ on it, they are seeming to remove old ads they had on their website.
COLTS, stop trying to cover your tracks and accept our message already. You’re going to lose this battle and be forced to put up our ads. Stop squelching free speech and cease this discrimination.

Look at an older archived version of COLTS’ website in the WayBack Machine to see the ads that were previously shown on COLTS’ website.