Some persons who seemingly have not really considered the issue of SOCAS or otherwise have read the reasons why people advocate for a total SOCAS tend to cast the issue in terms of offense and atheists ‘waging war’ with religion on a legal level. When I filed a complaint against a courthouse nativity scene in 2009 and was successful, many of my detractors told me that if I didn’t like the nativity scene, I should simply just look away from it and seemingly believed that me being offended by the display was a basis for my complaint.

Here are some of these comments from my detractors: 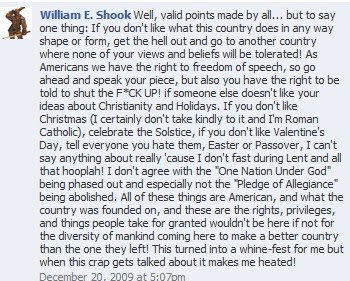 When responding to these comments, I have argued that me being offended (if this even were the case…and it is not) was not a basis for my complaint or why I advocate for a total SOCAS. If offense were the basis for a complaint, it seems, the complaint would be quite unreasonable and would be unsuccessful. After all, some Muslims were offended (and still are) by Salman Rushdie’s book “The Satanic Verses,” but this does not constitute a reason for a legal complaint. I don’t think that the language of being offended is helpful at all and seems to be quite unsuccessful because it fuels the myth of ‘atheists file complaints because they are offended.’

The Freedom From Religion Foundation and American Atheists — in some cases — have noted that persons were offended by religious displays in both legal documents and statements to the media. While I am members of both organizations and am generally in favor of most of what they do and how they do it, I am no fan of noting that people are offended by religious displays. Might, though, there be good reasons for this language and might it be required in some cases?

The issue of standing — the ability to demonstrate that an individual has been harmed in some manner or otherwise has some reason to file suit — has been a complex one for SOCAS advocates. Those who have attempted to argue that incorporating the pledge of allegiance in public schools with the words “under God,” for example, was unconstitutional have been unable, in some cases, to have a trial because plaintiffs were said to have lacked standing. Perhaps the language of offense would have been needed here in order for persons to file suit…or is this a problem with the legal system?

If persons arguing for SOCAS employ the language of being offended when they voice their rationale for filing complaints, defending those who do, or otherwise are simply arguing why SOCAS is important, it seems like the rest of the message is being compromised; arguing that one is offended or even a certain percentage of people are does not make the case for SOCAS being important for all or why the government should remain neutral on matters of religion.

Rather than arguing that a religious display may offend some, it seems more helpful to argue why SOCAS should be desired by all. SOCAS advocates might argue (and perhaps should) that it is selfish for people of a certain religious sect to want government favoring their variety of religion because a very large percentage of people ‘lose out’ and religious freedom is utterly compromised. Does it not seem to be equally selfish or very selfish for non-religious people to argue that certain religious displays should come down because they find them offensive (or merely just argue that they are)?

People like Dan Barker and David Silverman, of course, don’t only use the language of being offended in their arguments for SOCAS; they argue on other fronts that seem to be quite successful and appealing for everyone. Why not keep the arguments at that and leave out the language of being offended in order to appeal to everyone and frame SOCAS as an issue for everyone and not just atheists?

As always, feel free to chime in in comments below.