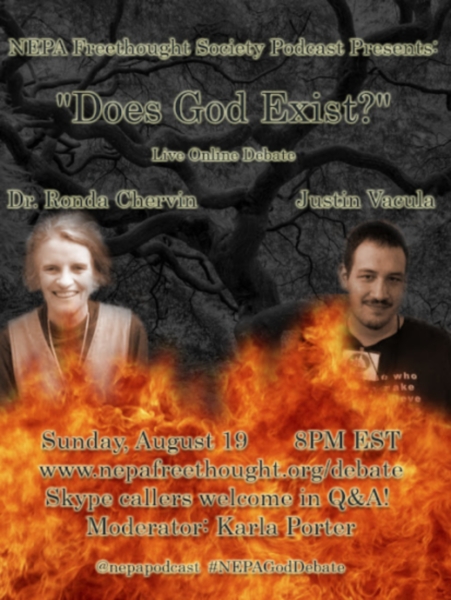 A local newspaper, the Citizen’s Voice, has published my letter to the editor concerning my upcoming “Does God Exist?” debate with Catholic philosopher Dr. Ronda Chervin on August 19. Hopefully many local people (from Northeastern Pennsylvania) will tune in and theistic callers will interact in the question and answer session following the debate.

For more information about the debate, as the letter says, visit www.nepafreethought.org/debate.

Dr. Ronda Chervin (Professor of Philosophy at Holy Apostles College & Seminary and recipient of a Ph.D. in Philosophy from Fordham University) will be debating Justin Vacula (blogger at www.justinvacula.com and recipient of bachelor’s degrees in philosophy and psychology from King’s College) on the topic of “Does God exist?” for a special live episode of the NEPA Freethought Society Podcast taking place on Sunday, August 19 at 8 p.m. Eastern Standard Time.

The debate will be streamed live at www.nepafreethought.org/debate. Karla Porter, local blogger at www.karlaporter.com, will be moderating the debate.

Following the debate, viewers are encouraged to ask questions via Skype handle NEPAfreethought. Alternatively, viewers can ask questions and comment in a chat room which will accompany the debate.

Past episodes of the NEPA Freethought Society Podcast, including special guest interviews and topical discussions, can be found at www.nepafreethought.org/podcast.