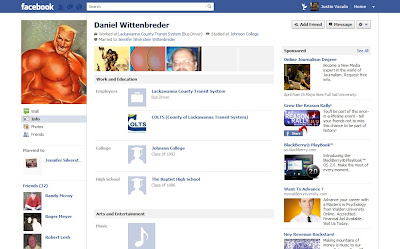 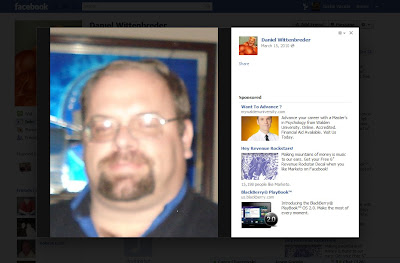 Daniel Wittenbreder, a person representing himself as a bus driver for the County of Lackawanna Transit System, is telling me to not to dare to show my face on his bus, calling me a “little punk,” telling me that “I should be ashamed of myself, and calling me an “atheist puke.” When I had asked him what he would do if I were to go on his bus, his response was “try it….” Later in the discussion, Daniel, responding to someone saying he’d join me on the bus, said, “…you will always be outnumbered, ALWAYS!!!” and “see ya on the road tomorrow.”

Just when I had thought everything has settled down in recent days regarding the County of Lackawanna Transit System (COLTS) controversy concerning the refusal of the “Atheists.” ad sponsored by the NEPA Freethought Society (and the associated removal…or perhaps not so much of the “God Bless America” message on the ‘public relation signs’), I had realized that a person representing himself as a bus driver has been saying some nasty things about me (even on my own profile!) while representing himself as a bus driver for COLTS! 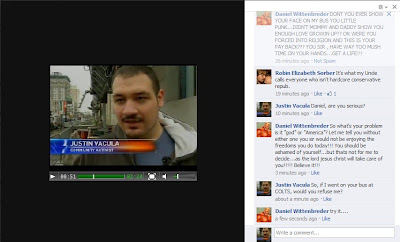 I had posted a video still of my recent interview on WBRE news and some comments by this person, “Daniel Wittenbreder,” representing himself as a COLTS bus driver has some choice words to say about/to me (unedited),

DONT YOU EVER SHOW YOUR FACE ON MY BUS YOU LITTLE PUNK…DIDN’T MOMMY AND DADDY SHOW YOU ENOUGH LOVE GROWIN UP?? OR WERE YOU FORCED INTO RELIGION AND THIS IS YOUR PAY BACK??? YOU SIR , HAVE WAY TOO MUSH TIME ON YOUR HANDS… GET A LIFE!!! (emphasis mine)

After I had written, “Daniel, are you serious?”, he had responded saying,


“So what’s your problem is it “god” or “America”? Let me tell you without either one you sir would not be enjoying the freedoms you do today!!! You should be ashamed of yourself…but thats not for me to decide…as the lord jesus christ will take care of you!!!! Believe it!!! (emphasis mine)

I responded, “So, if I went on your bus at COLTS, would you refuse me?”

try it… (emphasis mine) 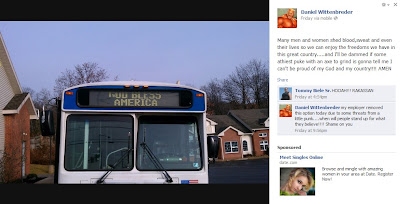 On Daniel’s profile, accompanied by a bus he presumably drives with “God Bless America” on the ‘public relations sign,’ Daniel writes,

Many men and women shed blood,sweat and even their lives so we can enjoy the freedoms we have in this great country….and I’ll be damned if some atheist puke with an axe to grind is gonna tell me I can’t be proud of my God and my country!!!! AMEN” (emphasis mine)

“My employer removed this option today due to some threats from a little punk….when will people stand up for what they believe!!!! Shame on you” (emphasis mine) 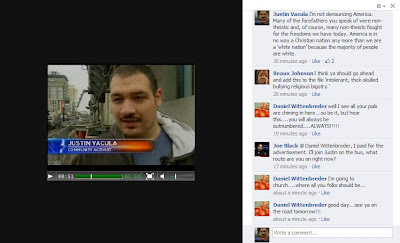 well, I see all your pals are chiming in here…so be it, but hear this….you will always be outnumbered….ALWAYS!!!! (emphasis mine)