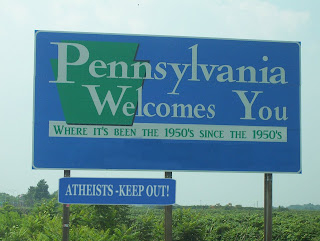 Reap Paden, a resident of California, is quite baffled by the recent happenings in Pennsylvania including but not limited to Senator Anthony Williams supporting a school voucher program in which money would go away from public schools and to private sectarian religious schools, Judge Mark Martin throwing out a case of harassment against a Muslim man who attacked ‘Zombie Mohammad‘ Ernest Perce, the County of Lackawanna Transit System (COLTS) refusing the “Atheists.” bus ad, and COLTS driver Daniel Wittenbreder “talking smack on my Facebook profile” daring me to come on his bus and calling me and other atheists “seeds of the antichrist.”

Read Reap’s blog post here.
Earlier this month, I wondered whether it is either the best or worst time to be an atheist in Pennsylvania. What do you think?