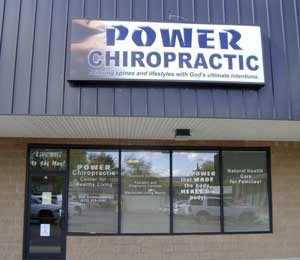 The POWER that MADE the made HEALS the body!

A few months ago, a friend of mine — author Kenny Luck — drew my attention to a local chiropractor named Dan Goleszweskiof “Power Chiropractic” who claims to “align spines and lifestyles with God’s ultimate intentions.” I found this claim quite interesting and rightly wondered what God had to do with medicine and why a person calling himself Dr. Dan would be injecting God into his practice.

Delving deeper into Dr. Dan, I discovered some other suspect claims and phrases he makes and uses such as “The power that made the body, heals the body” (this is on his store-front), misalignment [of the spine] results in a lessening of the body’s God-given, innate ability to express its maximum health potential, and our bodies were “created for at least 80 years of incredible health and happiness.” Obviously, if one reasons from a false premise, there’s a very good chance that their conclusion is false.

Instead of simply ‘throwing Dr. Dan under the bus,’ I visited his office for a free spinal examination during his free trial period and collected information directly from his office from my visit. My ideas did not change for the positive because I noticed a tremendous amount of propaganda in his office including huge containers called ‘Drug Free Baskets’ in which prescription drug bottles (and perhaps pills) are placed. This is very bothersome.

While I obviously have a problem with theology informing Dr. Dan’s beliefs about health instead of science-based medicine informing his beliefs, the bigger problem, though, is his message that is on his radio show and in his office… Dr. Dan talks about how medicines can make your body a “toxic reservoir” and, in the long term, can make you sicker. This information is extremely dangerous and some in his audience may forgo medicine. Not so fast, though! Dr. Dan also tells you that you shouldn’t go off your medications and that you should listen to your doctor. The mixed messages, we see, reign supreme.

I called Dr. Dan’s radio show months ago and asked a very simple question – “What does God have to do with medicine?” Dr. Dan, instead of answering the question and defending his ideas, if I recall correctly, said something to the accord of “This is just what I believe” and amazingly said that God isn’t a big part of his practice. He also, if I recall correctly, said that one doesn’t have to say that God is what he refers to as God – you can call it something else. My time on the radio show wasn’t long at all and, while I was off the air, Dr. Dan said he was happy to answer questions and that persons should e-mail him if he had any. I then e-mailed Dr. Dan my extensive blog post responding to his claims and asked for some feedback and clarification. I got nothing.

About a week ago, I discovered that Dr. Dan had the following to say on his Facebook profile concerning vaccines:

“You will have an opportunity to get a dosage of toxins and heavy metals at your local church! Apparently, God didn’t create our bodies to ward off the flu virus thus building a stronger immune system over time…this is sad. The flu isn’t caused from lack of vaccinations, it develops wherever there is a weak immune system…what are you doing this holiday season to keep your immune system at its best?”

This post was quite unconscionable and warranted a response. Again, we hear the ‘toxin gambit’ of seemingly scaring people into not getting vaccinated or using medications and God-talk that has no merit. How can we possibly even know, even if a god exists, that God “didn’t create our bodies to ward off the flu virus thus building a stronger immune system over time?” Additionally, the flu doesn’t develop only when there is a weak immune system – healthy people can get the flu.

I sent a friend request to Dr. Dan on Facebook so that I could have an open conservation with him and respond to some of his posts. I was promptly blocked by Dr. Dan. He didn’t accept my friend request and I didn’t even send him a message over Facebook.

I then published an Examiner.com article with comments from Dr. Steve Novella of Yale University who responded to Dr. Dan’s claims. Kenny Luck reposted the article on his own wall, posted it on Dr. Dan’s wall, and was promptly blocked by Dr. Dan.

If Dr. Dan claims that he is willing to respond to criticism via e-mail on his radio show, why doesn’t he actually follow up on his promise. If Dr. Dan believes that there is efficacy to his statements and beliefs about health [and God], shouldn’t he be willing and happy to respond without resorting to ignoring fair criticism and blocking his detractors on social networking especially when he says that he will respond to criticism.

The criticism, it seems, is just too much for Dr. Dan. He is well-aware of my blog post and my Examiner.com article. He’s been called out and his questionable claims have been highlighted. Ignoring the criticism, though, isn’t going to make it go away. Google results of his name show my criticisms on the front page right next to his website. Perhaps he will respond at some point in the future…or not.

Update: I authored this post early in the morning in order to post it in the afternoon. Kenny Luck, as I mentioned earlier, wrote a blog post about Dr. Dan in the meantime.