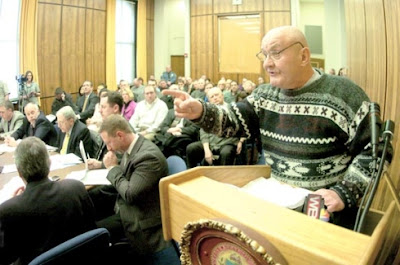 Someone in Northeastern Pennsylvania has finally accepted my public debate challenge.

Charlie “Bible Buck” Hatchko, a candidate running for Luzerne County Council, said he would debate me in the future soon after the upcoming election.

After posting the challenge on his Facebook page, Hatchko said,

Yes I will debate You. What are the specifics of the debate. After my election we will debate if the debate is on Biblical and theological, and philosophical principles.

A quick search of Google reveals that Charlie’s writing is featured on The Catholic Legate under apologetics. Many in the local area know that he is a frequent WILK Newsradio caller who is quick to cite scripture as justification for his ideas and that his politics are informed by theology. For instance, on “PittstonPolitics.com with Joe Valenti,” Hatchko writes,

Liberty includes the pursuit of happiness, which is the possession and exercise of virtue. Virtue is moral excellence goodness Remember (Proverbs 11:3) The integrity of the upright guide them. (Proverbs 13:6) Righteous guards the man of integrity. (Proverbs 14:34) Righteousness exalts a nation. (Wisdom 9:3) We are to rule the world in holiness and righteousness, and pronounce judgment in integrity of heart and soul.

Liberty includes the right to use and claim as an individual possession any unclaimed thing received from the hand of God, in or upon or above the Earth. This right to any possession includes its entire use, that is, its exchange, control, protection, and entire disposition. And the first and greatest of these possessions is our life.

Hatchko also frequently appears in local Letter to the Editor sections. Here is on example:

My perspectives and ideologies are based on Biblical principles, Christian virtues, natural law and on research that will be beneficial to the common good in Luzerne County. Every economic decision should be based on whether it protects or undermines the dignity of the human person and the societal value of the family. Elected Luzerne County Council members’ decisions determine and affect the lives of all people in Luzerne County. The respect for the individual human being and the societal value of every family is extremely important in decision-making.

I have attended approximately 40 home rule and transition committee meetings, yes more than any other candidate. Hearing testimony at home rule meetings on the operating procedures on every Luzerne County row office and other offices in Luzerne County Courthouse has been very beneficial, which will help me determine the operation, integrity and fiscal integrity of the office. Voters must recognize and realize that most candidates did not attend one home rule meeting.

With the absolute corruption coming through the judiciary in Luzerne County, the arrests and convictions of Conahan, Ciavarella and Toole give definite witness that moral authority as a force is extremely needed in Luzerne County. Do not be vexed by political jargon and rhetoric. Moral authority is crucial and authority as a moral force cannot be denied. Authority must be guided by the moral law which has God as its first choice and final end.

Authority must recognize, respect and promote essential human and moral values. Authority must enact just laws that correspond to human dignity and fiscal integrity. Political authority is accountable to the voters and people, and moral certitude determines good government.

I’m very much looking forward to this debate. As you know, the challenge states that the debate will be public. More details will be announced in the future. Hope to see you there!