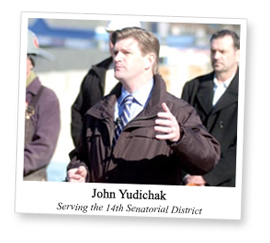 Recently, on live television during coverage of the NEPA flooding on WBRE, state senator John Yudichak said “Hopefully the good Lord will protect us” when commenting on the flood damage. I recently authored a letter to the state senator and await a response.

While I am in quite in-line with many of your political views, I am quite disappointed that, on live television on WBRE, you said “Hopefully the good Lord will protect us” when commenting on the flood damage. Citizens voted for you to do your job as a political official, not to make statements which are theological in nature.

I await a response.
Thank you.
Justin Vacula, co-organizer of the NEPA Freethought Society