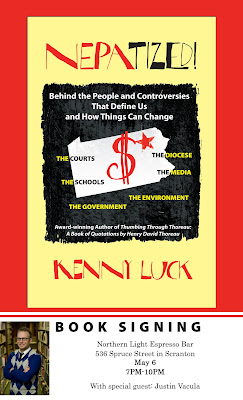 The April portion of the Nepatized! book tour has concluded. The signings were very successful, entertaining, and busy. Many came to chat with me and author Kenny Luck including “Duke From Dallas” of WILK fame :)
The first stop of May’s tour will be at Northern Light Espresso Bar in Scranton from 7PM to 10PM. While this isn’t a bookstore, copies of Nepatized! will be available for you to purchase…or you can bring your own copy to have it signed. If you can’t make it to this signing, feel free to buy your copy on Amazon or both Barnes and Noble locations in Wilkes-Barre and Borders in Dickson City.
Nepatized and author Kenny Luck have been in the media recently during the book tour (click on the following links for the stories):
WVIA Radio
Go Lackawanna
Electric/Diamond City
The Weekender
Facebook event: http://www.facebook.com/event.php?eid=151656764901845