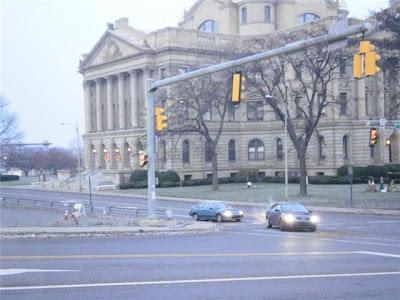 [Article link no longer working, but is reproduced here]
December 17, 2009

A familiar nativity scene and menorah were removed from the Luzerne County Courthouse lawn Wednesday night because the American Civil Liberties Union threatened to get a restraining order.

The ACLU argues the displays violate the separation of church and state clause of the U.S. Constitution, DeLuca said.County Solicitor Vito DeLuca said a Pittsburgh lawyer from the ACLU contacted him Wednesday to give the county an opportunity to remove the items before it filed court action that was already in the works.

DeLuca said county officials opted not to spend time and money on a lawsuit – at least not at this time – because they are swamped with the budget crisis and other pressing matters.

“We didn’t feel it was in the best interest of the county at this time to fight that battle,” DeLuca said. “We believe the most prudent thing at this point was to remove the items.”

An ACLU representative could not be reached Wednesday night.

The county may revisit the matter next year and come up with alternatives that don’t violate the Constitution, DeLuca said.

DeLuca said the public should not get the impression that any county officials personally agree with the removal. He remembers spotting the courthouse nativity scene as a boy.

“Clearly, we all have our own faith, but the law’s the law. The nativity scene and menorah have been a part of the courthouse a long time, and I’m sure people remember them when they were growing up,” she said.

Petrilla said she and other county officials believed it would be “irresponsible” to engage in a lawsuit.

“We can all express our faith privately when we’re in our homes,” Petrilla said.

The nativity scene that has been placed on the lawn for decades included a manger, kings, shepherds, animals and Mary and Joseph. Building and grounds staffers placed Baby Jesus in the nativity on Christmas Eve.

Building and grounds workers removed everything except the manger and turned off the nativity spotlight.

DeLuca did not know if the ACLU complaint stemmed from a local concern.

The ACLU had threatened a lawsuit against the county over this issue in 1990, but a suit never materialized.

Commissioners at the time refused to comply with the removal request. They expanded the manger and decided to add a menorah. Security was also added to make sure the items were not vandalized at night.

Nativity scenes on courthouse lawns became an issue in the late 1980s after the U.S. Supreme Court ruled that a nativity scene was an endorsement of Christianity and violated separation between church and state.

Jennifer Learn-Andes, a Times Leader staff writer, may be reached at 831-7333.