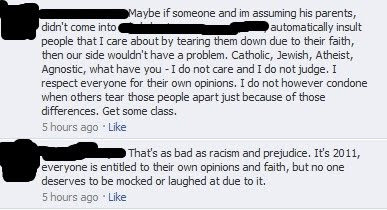 (This is a Facebook screenshot in which someone claims that atheists who “insult people” by “tearing them down due to their faith” are “as bad as racism and prejudice.” Information is blotted out to protect the identities of some people (even though they are quite happy to claim that [some] atheists are just as bad as racists).

Backstory on this issue and the above picture…

(you don’t need to read this to understand everything, but feel free to do so or simply skip to the next bolded section in this post):

At the expense of some drama, I feel that an issue desperately needs to be addressed right here and right now. This Friday, after my monthly “Drinking Skeptically” meetup of the NEPA Freethought Society, two friends of mine, with me, went to a local business (name removed in the above picture) to ‘shoot the breeze,’ play some Scrabble, and not go to a nightclub.

One of my friends, Patrick, whom I first met at the meetup who wanted to spend some more time with my other friend and me, when entering the business, sat down and initiated discussion with some of the other patrons sitting adjacent to us. I’ll recount that which I can remember although, of course, memory can be faulty and I don’t remember everything. Patrick asked a group of three people “Can I ask you a personal question?” and all responded in the affirmative. Patrick asked, “Do you believe in God?” At least two of them said, “I don’t really go to church though” or something very similar.

One of the persons in the group said “that’s a very personal question” after the person said that it was okay to ask a personal question. Patrick responded saying, “Yes, it is a personal question.” Soon after this, two persons of the group walked away and left the business. One of the persons stayed to discuss and said something similar to “I want to send my children with church so they can be functioning in life.” I said, looking up from the Scrabble board, something similar to “Why does one need church to be functioning? Do you think atheists aren’t functioning?” The person responded, “No, I think atheists are functioning” and we entered into a short discussion about whether God is needed for morality.

Soon after this, the owner of the business, a person whom I know and have debated with on various occasions about Christianity (he’s a Christian) came to the area where my group was sitting with a religious book of some sorts. Patrick asked him what he was reading and we had a short discussion about religious experiences. The owner said that he came to talk to us because a person alleged that Patrick, when someone mentioned church, responded with “Eww” and this person felt offended and left. The owner said something similar to, “I don’t appreciate what you did and I don’t appreciate customers leaving because of what you said.”

Patrick immediately objected saying that he didn’t say “eww” and did not mean to offend anyone. He said that he would like to resolve the situation, meet the person accusing him, and apologize if anyone got offended because he does not intend to offend anyone. The owner refused to do so and only would, after some discussion about the situation, tell the person what Patrick said to him. The owner did not ask us to leave [and we actually stayed until the business closed]. The person who stayed to talk about morality came back to talk, and the accuser failed to face Patrick. The person who stayed to talk concurred that “Eww” was not said and said that he enjoyed talking with us.

I told Patrick that nothing he said was offensive and that if a person is offended by something as simple as a response of “eww” to “I go to church” (whether he said it or not) is not Patrick’s problem, but rather the problem of the churchgoer. This is especially ironic because earlier in the night, when Patrick asked someone if he/she believed in a god, the person shuddered and said yes. Patrick said something like “Wow that tells me a lot if you would respond like that.” After that discussion, Patrick and I talked about how people get so defensive, are often reluctant to explain their positions – but people like us are happy to explain what we do and do not believe. Truth, I said, should fear nothing.

About 24 hours after the discussion at the business, the above picture comes in….and now you have the backstory to make more sense of what happened.

Update (a few hours after posting): After this post was authored, I discovered that some more people, including the owner of the business, were talking about this ‘incident’ online.

The initial claim, made by the owner of the business, was that the offense was a result of the comment “ew” when someone spoke of church-going.

Now, the claim, from one certain person, is that Patrick was ‘laughing’ and ‘mocking.’

Now, the owner of the business is blaming the group of three (myself, Patrick, and another friend) for insulting a group of four people [keep in mind that four people weren’t even sitting in the couch and one person who was sitting stayed to chat with us and said that nothing offensive was said].

The story is changing…how interesting.

Throughout my close to three years as an atheist, I often meet religious people who, in a response to a discussion or even writing of mine that no one is compelled to read, claim that atheists, for publicly denying the validity of religious claims, are being offensive. Such people often resort to the profoundly lackluster ‘defense’ of ‘right to opinion’ (and seemingly now, right to faith as shown in the picture) somehow claiming that their beliefs should not be challenged, those who do so are acting in an immoral fashion, and that “no one deserves to be mocked or laughed at.”

I have noted on previous occasions that I have never, ever, ever heard an atheist resorting to these lines of ‘defense.’ Atheists I know who are very public about their atheism hear all sorts of egregiously offensive remarks from theists, but they don’t hide behind a ‘right to opinion’ or fail to have the discussions if they happen to feel offended. Theists, it seems, speak from a perspective of great privilege and are not accustomed to defending their beliefs (as the Bible in 1 Peter 3:15 compels followers of the New Testament to do).

When I am in a conversation and believe that someone said something quite egregious to me, I respond to the claim and try to resolve the problem. For example, someone in a recent conversation told me that I haven’t had enough experience in life yet and that is why I don’t believe in God. Further, she said that atheists are unhappy, lonely, and bitter and while I might be happy now, I won’t be later in life. Instead of just walking away from the discussion or whatever else, I responded to this claim that might anger a great deal of atheists.

Theists often work from the false assumption that disagreement is somehow ‘judging’ someone (see above picture) and that disagreement is disrespect. I have answered these objections in this post and would rather not rehash my responses to this. To quickly summarize, disagreement with an idea should not be construed as a character evaluation of a person holding the idea, people should not assume that others consider them to be ‘stupid’ because they disagree with an idea, and we need to ‘separate beliefs from persons’ by ‘stepping back from our beliefs’ in order to challenge our own beliefs, get closer to arriving at truth, and have discussions with those who disagree with us.

This idea of ‘right to opinion’ is probably my least favorite statement anyone can possibly utter in any discussion [related to religion]. Am I acting in an immoral fashion if I present an objection to your position? Shall I refrain from ever uttering disagreement because people might claim offense? Holding an opinion simply doesn’t make something true. Not all opinions are ‘created equal’ and many opinions can be said to have more truth-value than others. Why is it the case that you have a ‘right to opinion’ and I, apparently, do not have a ‘right to voice my opinion?’

Racists operate under the irrational belief that some people, typically because of skin color or country of origin, are inferior to other people. Some racists may want some individuals to have less rights than others, may claim that ‘mixing of races’ is bad for whites, etc. Contrary to what some racists may believe, race is a social construct and there is no ‘scientific basis for racism.’ While I certainly can’t ‘speak for all racists’ and am not interested in touching on the ‘finer points’ of racism, I hope that my readers are not racists and generally understand what a racist is for purposes of the discussion.

Atheists, on the other hand, only, at the bare minimum, lack belief in any gods. While many atheists may share similar beliefs (separation of church and state is a good thing, there is no good reason to believe in anything supernatural, faith is not a good pathway to knowledge), it is absurd to compare atheists to racists. Disagreement with theists (or even mocking and laughing at if it happens) is much different than the discrimination against certain people (and much more) because of their skin color or country of origin.

I, and almost [if not all] every atheist I have met, have never argued that theists should have less rights than atheists, that people are biologically inferior because they believe in gods, or anything similar. My arguments against faith-based belief and the like are against ideas, not persons; I don’t discriminate against persons by any means.

It seems quite disconcerting that this topic even has to be addressed. Voicing disagreement with someone on matters of religious belief is not “as bad as racism.”

It’s also quite ironic that a person who says “get some class” compares atheists to racists.