I’ve briefly commented on Catholic charities in previous blog posts, but would like to focus the discussion in this post on charities that ‘play the victim card’ and distort issues relating to ‘forced closings.’ For example, Catholic charities within the Catholic Archdiocese of Washington D.C. bill that was proposed. Catholics, in this incident and many others, claim that the government violates their religious freedoms and insist that religious exemptions be appropriated. When governments fail to meet the Catholics’ demands, charities close their doors, claim that they wanted to continue services, and blame the government for the closing. All of this, of course, is a giant smokescreen. END_OF_DOCUMENT_TOKEN_TO_BE_REPLACED

A holiday from controversy

By Jennifer Learn-Andes jandes@timesleader.com
Luzerne County Reporter
A seasonal display has returned to the Luzerne County Courthouse lawn, with the traditional Nativity mixed in with Santa,
a Menorah and candy canes.
AIMEE DILGER/THE TIMES LEADER
A seasonal display that includes a Nativity has returned to the Luzerne County Courthouse lawn, and King’s College senior Justin Vacula said he’s fine with it.
Vacula was the target of backlash last year when he initiated a complaint about the display that led to its removal.
After legal research, county officials set up a more diverse display that is being repeated this year.
According to a resolution recently adopted by commissioners, the display must now include a menorah, Santa Claus, snowman, snowflake, Christmas tree with a Kwanzaa symbol ornament and a sign that reads, “Luzerne County celebrates its cultural heritage this holiday season.”
Courthouse workers say finishing touches to the display will be made early next week.
Vacula said he has no problem with this arrangement, as opposed to last year’s initial display that isolated and illuminated the Nativity.
“This seems to be the way to go. Now everything is together as a unified display,” said the 22-year-old Exeter native.
His decision to turn to the American Civil Liberties Union and Americans United for Separation of Church and State last year turned him into somewhat of an outcast.
Vacula said he was inundated with hate mail, paper and electronic, and one local radio station described him as the third most hated local person after former county judges Michael Conahan and Mark Ciavarella, who were implicated in the federal corruption probe. People called for him to be expelled from King’s College, he said.
There were also demonstrations outside the courthouse before the Nativity was returned to the courthouse lawn, and a page was set up on the Facebook social networking website to criticize Vacula, he said.
“I received a lot of after-death threats. People said I’d be tormented for eternity, and that they wanted to watch it happen. People said they hoped I’d get shot and hit by a van and die,” Vacula said.
In retrospect, Vacula said people turned it into a religious debate, when he thought of it as a legal one.
“It was a legal issue. Whether you’re a believer or not, I think everyone should be in support of separation of church and state. People didn’t understand that,” Vacula said.
He said he doesn’t regret his stance, though he wishes he had been better prepared for the “hysteria.”
“I thought there would be a backlash, but I didn’t think it was going to be as big as it was,” he said.
Vacula, an atheist who posts his views at greenatheist.blogspot.com, said he accomplished his goal: ensuring that the county complied with the law.
He said many came forward to support him in that goal, though some didn’t openly show it.
“People said I was taking away Christmas. That’s impossible to do. People can put anything they want in their yards. They can meet with their family at Christmas and go to Mass,” he said.
Jennifer Learn-Andes, a Times Leader staff writer, may be reached at 831-7333. 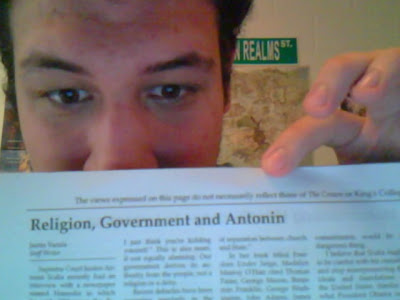