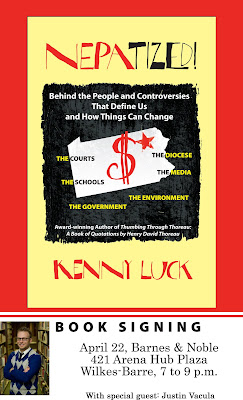 Author Kenny Luck and I will be at Barnes and Noble at the Arena Hub Plaza (behind the Wyoming Valley Mall and near Best Buy) on April 22nd at 7PM to 9PM. Kenny Luck and I will be singing books and having conversations with whoever would like to come. You can buy the book on Amazon or pick it up on the 22nd. Hope to see you there! Upcoming events will be Northern Light Espresso Bar at 536 Spruce Street in Scranton on May 6…and hopefully some more such as Harrisburg, PA Borders.