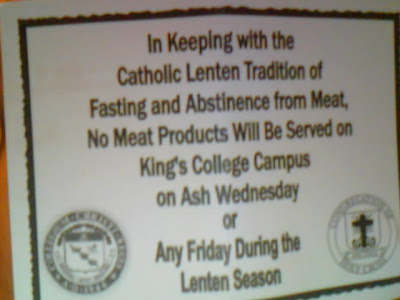 During the Lenten season, King’s College removes meat from ALL dining locations on campus and forces students and faculty to abide by the Catholic tradition of fasting from meat on Fridays regardless of their religious beliefs, lack of religion, or general disagreement with the Catholic tradition of fasting. Some King’s College students are not traditional Catholics in the sense of following all traditions and abiding by them. Many believers in the Christian god do not subscribe to church teaching and have their own views of how they should worship god and abide by church teachings. King’s College should serve meat on Lenten Fridays so that the fast is an option and authentic. Serving meat will respect the choices of meat-eaters, not financially burden those who wish to purchase meat on Friday, and assure that the college’s mission statement is upheld.

The purpose of fasting during Lent (at least as I learned it in Catholic schooling) is to defeat temptation and gain some sort of spiritual benefit in giving up something you enjoy for some greater good. How can removing meat from all dining locations on campus possibly fulfill the goal of defeating temptation through fasting if fasting is not even an option and the temptation of meat eating is not even present?

Imagine if Catholics decided that abstaining from eating ostrich meat was an obligation during Lent. Would one say that a person has genuinely fasted if ostrich meat was not even available? No. Fasting must require giving up something that is reasonably available. The ostrich-fasters should not be praised for their “fast” if they didn’t even have access to the ostrich meat to begin with.

Much more often than not, for financial reasons, students will eat at the college dining facilities. Regardless of the choice to fast, all students who eat on campus will have no choice in the matter – they will not be able to order meat products. If meat-eating students who do not follow the Catholic tradition of fasting wish to eat meat, they must spend money in excess of what is already spent on the meal plan.

Forcing everyone to follow a Catholic tradition betrays the school’s mission statement that aims to be open and respectful of individuals of different cultures, religious faiths or no religion, etc. The King’s College mission statement says, “King’s College welcomes students from diverse backgrounds and strives to educate them in a community committed to academic excellence, mutual respect, and social responsibility.” What of the students from different backgrounds (i.e. non-Catholic or not following Catholic traditions) who enjoy eating meat?

If King’s College wants to be true to the Catholic tradition of fasting from meat, the college should offer meat and remind students and faculty that Catholics are obliged [not forced] to refrain from meat eating during Lent. Serving meat will ensure that the fast is voluntary, linked with temptation/the possibility of not following the tradition, and genuine. King’s College should allow individuals of the community to make their own decisions when Catholic traditions are concerned and not force its members to abide by Catholic traditions. Meat eaters with meal plans should not be forced to spend money off-campus and should be able to purchase meat as usual from campus restaurants.

Change the policy of no meat on Fridays, make fasting voluntary, and respect the decisions of members of the King’s College community. Doing so will allow for a more authentic fast and reinforce the idea that King’s College is a place for people of all persuasions.