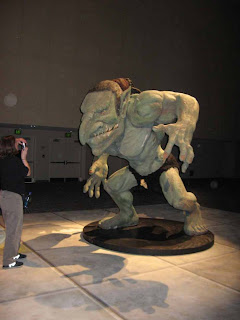 Sam Harris has published a new blog post titled “Wrestling the Troll” in which he describes that, for him, there is “no effective way to respond” to many of his critics who uncharitably interpret his ideas. Harris says that he’d rather, in some cases, simply ignore the criticisms because people haven’t initially taken the time to read what he had to write and are intellectually dishonest. Harris, in his post, specifically addressed one of his uncharitable critics — and one person I have increasingly seen as being quite uncharitable — PZ Myers.

Harris mentions an article on Alternet, “The 5 Most Awful Atheists,” (also reproduced in Salon) in which his views were misrepresented and notes that “that shepherd of Internet trolls PZ Myers” [author of an “odious blog”] has “gleefully endorsed” the article “amplifying its effect.” Harris writes,

In fact, people like PZ Myers continue to malign me as an advocate of “racial profiling.” I have written to Myers personally about this and answered his charges publicly. His only response has been to attack me further and to endorse the false charges of others. I do not think I am being especially thin-skinned to worry about this. Accusations of racism and similar libels tend to stick online. If my daughter one day reads in my obituary that her father “was persistently dogged by charges of racism and bigotry,” unscrupulous people like PZ Myers will be to blame.

It is difficult to overlook the role that blog comments play in all this. Having a blog and building a large community of readers can destroy a person’s intellectual integrity—as appears to have happened in the case of PZ Myers. Many people who read his blog come away convinced that I am a racist who advocates the widespread use of torture and a nuclear first strike against the entire Muslim world. The most despicable claims about me appear in the comment thread, of course, but Myers is responsible for publishing them. And so I hold him responsible for circulating and amplifying some of the worst distortions of my views found on the Internet. I have been a fan of PZ Myers for some time and was especially happy that he promoted my content/activism concerning the legal threats I received for offering criticism about a local chiropractor named Dan Golaszewski and the refusal of the “Atheists.” bus ads which made national news. I was happy to meet PZ at American Atheists’ 2012 annual conference and had a picture taken with him after some discussion (see above).

In recent weeks and months, though — especially following the vicious attacks on D.J. Grothe, The Amazing Meeting, and the James Randi Educational Foundation from many writers on the Freethought Blogs network — I have noticed an extremely low level of discourse at PZ’s blog. Looking back, I have noticed that his attacks on fellow secularists Michael de Dora, Edwina Rogers, Chris Stedman, Massimo Pigliucci, and many more (from both PZ and his commenters) are reprehensible and not conducive to community building, rational discourse, or respectful discourse. I’ve also been the target of ridicule at the hands of PZ.

Perhaps PZ and many Freethought Blogs commenters should take a lesson in civility and respect from fellow Freethought Blogs blogger Dan Fincke. If we want to demand respect from others and encourage a civil atmosphere free of personal attacks, name-calling, and insults, it would probably be best to emulate that behavior and create an environment in which civil behavior is called for. PZ, though, quite unfortunately does not seem to be interested in that. He and his commenters may direct hate at whomever they please, but when internet trolls happen to make nasty comments about Rebecca Watson and her fellow Skepchicks…well, that’s just unacceptable.

This isn’t to say, though, that the hate emanating from PZ Myers’ blog and comment sections when compared to the hate women in the secular community receive are equal. I wouldn’t even know this can be ‘measured,’ anyway. There seems, though, to be a problem when the “shepherd of internet trolls” (as Harris calls PZ) is engaged in a great deal of hate-mongering and character attacks along with his respective commenters. Why not extend the rebuking ‘hate directed toward women’ campaign to all persons and call for a global civility within the atheist/skeptic online community? Would PZ be interested in toning it down, rebuking his commenters, and committing to a respectful environment? Probably not.