Skip to main content
I’ve received a load of hate mail, nasty comments, and hate from many people from Luzerne County who claim to be loving individuals: 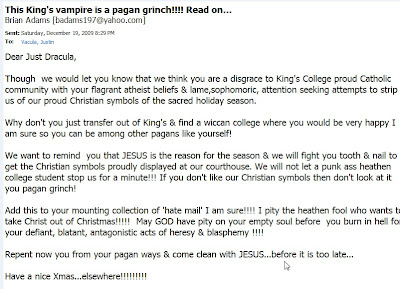 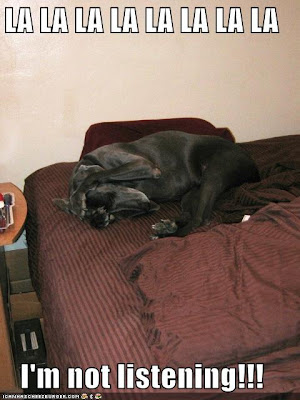 This above picture represents a great deal of people who are trying to argue with me. People don’t want to listen to reason, but rather argue that we should totally forget the law and not care about the constitution.

Before even engaging in a discussion with me, you need to read the legal arguments. I don’t think many people actually have. Many people hopped in and started to attack with without actually listening to the legal side of the story and what I had to say.

Here is a response to all of the arguments that have been levied against me:

Why did you contact the ACLU to cry and be a bully to the county?

I did not contact the ACLU to “cry” or be a bully. The courthouse would have almost certainly ignored me or even a group of friends. If I tried to chat with them about moving the decorations around, they also would have ignored me. They even responded to the ACLU message at the last moment! Anyway, why does it take an ACLU letter to remove the displays or change how it was? The courthouse officials should have done it right the first time. They, over any other or most people, should know the law and conduct business in a lawful manner.

Every person, regardless of faith, should be on the side of the law saying something like “The displays were clearly unconstitutional and the courthouse officials should not have had them up in the first place” even if they didn’t like the fact that I contacted the ACLU.

Why did you do this?

The government should not endorse religion. The displays at the courthouse were clearly unconstitutional and endorsing religion. Government endorsement of religion undermines everything our nation stands for. It’s quite simple.

Give the Courthouse a break!

Why should we be giving the courthouse breaks and hoping that they do the right thing all of the sudden [and they still failed because they put these displays up in the manner that they were in the first place]?

Regardless, the displays were in clear violation of the law and should not have even been up there in the first place.

Some are just trying to hide behind the “we don’t have the money to fight” statement. There was never any need for a case because the constitutional violations were clear. I made this very clear on my blog post before the displays were taken down.

You’re just trying to push your beliefs on everyone else!

I’m not trying to push any beliefs with this matter; I am merely upholding the constitution and doing what is right.
Of course I am a public atheist…and this is a great issue to actually do something right in this county to stand up for what I “believe in,” fight for our rights, and uphold the constitution.

I don’t need to “believe” anything to “preach” anything to stand up for the constitution. Did I ever say that because I don’t believe in God all items should be taken down? No. That’s ridiculous.

The displays are free speech!

You are trying to take away our rights!

Actually, I’m protecting them. How is taking down an unconstitutional display taking away your rights? You can have your religion and your nativities at home, in church, or on private property…but not endorsed by government.

Be tolerant of others’ beliefs!

Being “tolerant” of others’ beliefs and talking with courthouse members would have done nothing. Tolerance is totally not the issue here. I’m obviously tolerant of others’ beliefs…I attend King’s College. Sure, I don’t agree with religious ideas and think that God is imaginary, but I’m not going around sending hate mail to Christians like many people are doing to me about this matter. I do get into some intense debates with some people about religion, but I have never levied a personal attack against any individual. I’ve even apologized when people complained that I was being harsh when debating when arguing against religious beliefs and ideas.

You’re only looking for attention, you pompous ass!

I’m not going to be silent about this. It’s time to stand up and be public instead of treading lightly when fighting for the rights for every American citizen. I wanted to be heard, give my side of the story, and stand up for once instead of just sitting around and skirting about. This isn’t a “pompous, selfish, cocky and attention seeking” issue.

Sure, I enjoy being active in this issue, giving statements, and being interviewed because I will defend what is right and I am not afraid to be public about it. The people need to know the truth instead of half-stories, false motivations attributed to me, etc.

But this is a rich ethnic tradition!

The law is much more important than tradition. When something is wrong, we ought to call it out and stand up for our rights. We had a lot of “traditions” in this country such as women not voting, slavery, racism, lynching, etc. Sure, the nativity scene is not “hurting” anyone, but it is still wrong when it is being showcased as a very clear governmental display of religion…just as the previous mentioned traditions were.

Why should I appreciate that the government had an unconstitutional display on a courthouse lawn? Are people really that concerned that one nativity scene and menorah went down when there are so many others?

The county prides itself on coal mining history, the Tomato Festival, church bazaars, ethnic foods, and the like. There was no major tradition regarding the courthouse nativity scene and menorah. You can have your religious traditions in the many, many, many displays all throughout this county in churches, homes, private property, and probably in your house. Regardless, this “tradition” was illegal.

Why is this such a big deal?

This is important because governmental endorsement of religion undermines everything our nation truly stands for. This, though, shouldn’t be a big deal in the media. The complaint sent to the courthouse should have been addressed on day one by the courthouse officials. The nativity and menorah should have been taken down when the complaint was filed and the conversation should have ended there after the legal arguments were sent out. The religious people are making a big deal about this. I am simply defending what is right, defending myself, and upholding the constitution.

You attend a Catholic College…

Right. I do attend a Catholic College. What does this have to do with me upholding the law? I see religious symbols all over campus, but don’t do anything about them because this is a Catholic College, not a courthouse lawn. I love attending King’s College and have a great time here. I discuss religion, philosophy, and anything else I want to with the priests, theologians, and fellow students.

There is no “Catholic requirement” to be a student at King’s College. People of all faiths and no faith are welcome here.

If it offends you…

I’m not offended by a nativity scene at all. I am, though, “offended” by governmental endorsement of religion because that is unconstitutional and undermines everything our nation stands for. We are supposed to be a secular democracy, not a Christian theocracy.

We are a Christian Nation founded in Christian principles and our money says God on it!
This idea of a Christian nation is one of the biggest lies ever told. We may be a nation where the majority of the people are Christian, but this does not matter.

In her book titled Freedom Under Siege, Madalyn Murray O’Hair cited Thomas Paine, George Mason, Benjamin Franklin, George Washington, John Adams, James Madison, John Quincy Adams and, of course, Thomas Jefferson, as early American Deists, people who believe that a non-specific deity created the universe but is no longer active in human affairs. A key idea of the United States government is that we are not a nation that supports a particular religion; we are a secular nation.

In 2008, President Obama said the following… “Whatever we once were, we are no longer a Christian nation, at least not just. We are also a Jewish nation, a Muslim nation, and a Buddhist nation, and a Hindu nation, and a nation of non-believers. […] Democracy demands that the religiously motivated translate their concern into universal rather than religion specific values. […] It requires that their proposals be subject to argument and amenable to reason. […] To base our policy making on such [religious] commitments would be a dangerous thing.

Similar to what President Obama said, we are a very diverse nation of diverse individuals. All United States citizens are free to worship whatever or whoever they would like: The Flying Spaghetti Monster, Thor, Poseidon, Jesus, Krishna, Allah, or nothing. Our freedoms from and of religion are very important and must be embraced in order to maintain our individual freedoms. If someone would like to follow precepts of a certain religion he/she may, but precepts or ideas ought not be the basis of lawmaking decisions or be displayed on governmental property; there are private churches, private schools, and other private institutions for that.

The phrase “In God we trust” was added to our money during the Red Scare.

Christmas is a Christian holiday!

Well, it’s actually not originally. The roots of this holiday were from old mythology and pagan ideas. Christmas was commercialized heavily and it is what it is now. If you like to celebrate the birth of Jesus on Christmas, great. Fine. Not everyone celebrates that, though…and the government should not display a message of supporting Christianity to the people.
More on Christmas roots: http://www.simpletoremember.com/vitals/Christmas_TheRealStory.htm

Afterthoughts…
It seems that in this case that the majority of the people in Luzerne County (and maybe you aren’t one of them) know almost nothing about the law, and even if they do, would rather that the law be subverted in lieu of their [religious] beliefs and ideas. That is a very sad situation that would cause the founding fathers of our nation to roll over in their graves if that were possible.

I have received so much hate regarding this…and why? Many religious people (and maybe you aren’t one of them) are willing to ignore the facts, close their ears, not read well-crafted arguments, and just run a campaign of hate against me. So much for loving Christians. Some, though, have actually agreed with me and sent me good wishes, congratulations for standing up for what is right, and even prayers. I greatly commend these people who sent me well wishes and have expressed my thanks to them.

Of course all Christians aren’t bad people.
Of course some Christians have made an effort to make a personal decision about religion and not just blindly follow.

The majority of people who are opposing me are certainly not very intelligent and are just resorting to personal attacks. (though maybe you are). Just read the comments on the articles and my Facebook wall. Look at Craigslist, Google me, etc. A Facebook group that is bashing me has blocked me from responding/joining.

Hate me, love me, disagree with me, whatever.
I’m very serious about the matters I take seriously whether they be gaming, atheism, religion, or the separation of church and state. If you don’t like it, fine, but my legal and personal reasons for doing this are well-substantiated and I am 100% justified in all I have done in this situation.

If you would like to have a reasonable discussion with me, feel free to do so, but don’t resort to personal attacks!